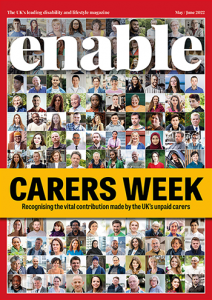 This June, Carers Week will recognise and celebrate the UK’s hidden workforce of 13.6 million. To mark the awareness week, Enable Magazine, the UK’s leading disability and lifestyle title, is spotlighting four unpaid carers’ stories. Below, you can read a preview of these stories directly from Enable.

Each year, Carers UK bring together a host of organisations to mark Carers Week (www.carersweek.org). The annual campaign, taking place from 6-12 June 2022, raises awareness of caring, highlights the challenges faced by unpaid carers, and recognises the vital contribution they make to not only families, but the wider community. A key part of the campaign is sharing information to allow people to identify themselves as carers and access essential support, and for existing unpaid carers to learn about their rights.

As the awareness week begins, four unpaid carers share their thoughts and experiences of caring with Enable, the support they currently receive, and what they wish people knew about the role.

Don, who is a vice president at Carers UK cares for his 45-year-old son, Sam, who has Down’s syndrome. Just over three years ago, Sam moved into a supported living facility, but during the pandemic Don made the decision to bring him home and go back to caring full-time for Sam’s safety. 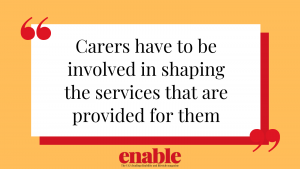 “At the beginning of the pandemic there wasn’t much communication with care services about what they should do, but then day centres and other activities closed. I knew I had to think about how to protect [Sam]. For my family and I, there wasn’t a choice, we weren’t going to cut off his social contact with us because he wouldn’t understand why that was necessary, and so I moved him home.

Now, Sam is back in his supported living, but at the time I think we were caring for each other really. During this time, it was further highlighted how little services connected carers and the people they care for. I was in a better position than most because I have a supportive family and I’ve had a comfortable career, but I’m very conscious that I’m privileged in this and that it’s not the same for a lot of carers who live with money worries. As things change carers have to be involved in shaping the services that are provided for them.”

Martin has cared for his wife who has MS for 27 years and has received support from his local carers organisation in recent years. One of his main concerns is the lack of financial support available for carers to cover living costs as well as funding for respite and recreational activities.

“Generally, carers need ways to let off steam because this excessive pressure is going to work against us. Unpaid carers are consistently praised, but at the end of the day we don’t need praise, we need money.

For years we haven’t been able to take a holiday or attend family occasions and it has created isolation, there’s not many chances to enjoy the pleasures of life or just to relax somewhere. I’ve been able to utilise the Carers Network services in recent years, but things like this need to be more accessible and promoted so that more unpaid carers are aware of the help that is available to them.”

Fatimah, who is 17, cares for her father who has musculoskeletal issues and severe anxiety and depression. With the support of Carers Trust Scotland and Action for Children, Fatimah has shifted her mindset around caring and is now preparing to attend university once she finishes school. 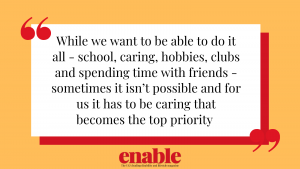 “Ever since I found out that I am a young carer and associated with the young carers, I feel as if I’ve learned so much which has changed the way I deal with situations and has opened up a whole route of different types of support that I could get.

Although my caring role hasn’t lessened, through the support of my local carers centre, I have been able to deal with it in a more positive way by meeting people who are in a caring role like me, who understand what I’m going through and are ready to support me. I feel I can share my apprehensions without being judged which really helps me with my own mental health and positivity.”

Ruth is 17-years-old and cares for her father who is a wheelchair user. She was first identified as a young carer by her school and local carers centre, and has since worked with Carers Trust Scotland to highlight the importance of young carers’ rights.

“The thing I wish more people knew about young carers is that being one is nothing to be ashamed of, if anything it is something you should be so proud of as you are developing these amazing life skills and by doing this will be ready for what comes later in life.

I would like to see more support around schools for young carers in Scotland, as for most of us these two things may be the biggest parts of their lives, so the support in both areas should be better connected. While we want to be able to do it all – school, caring, hobbies, clubs and spending time with friends – sometimes it isn’t possible and for us it has to be
caring that becomes the top priority.” 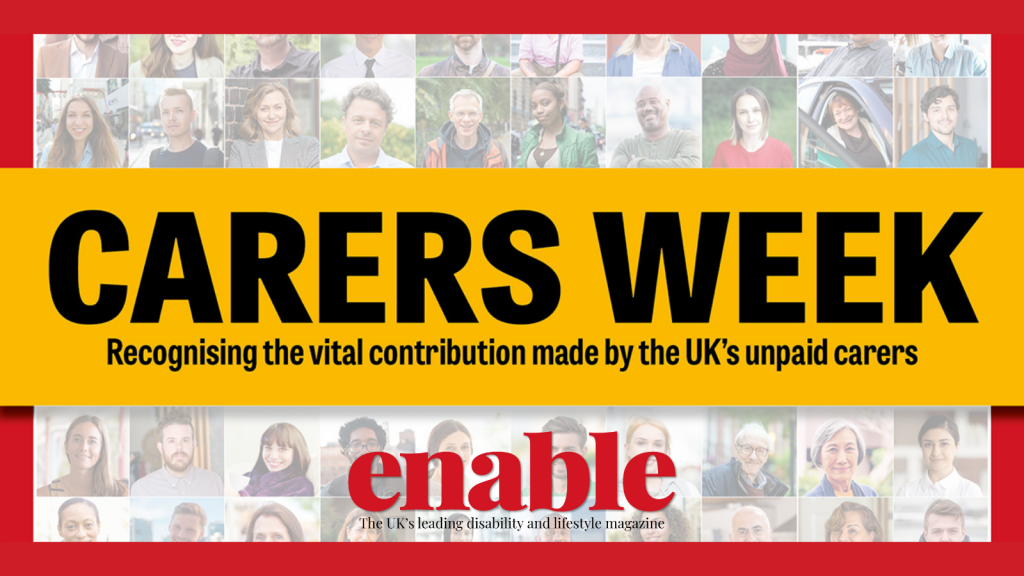