This is Carers Week

Val Hewison, Carers Leeds Chief Executive tells us why we should care about Carers Week and how it continues to make a difference. 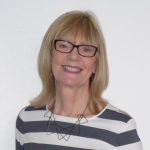 “A silent eye roll met me today whilst talking to a friend of mine about Carers Leeds ratcheting up a gear for Carers Week.

As a full time carer herself for her husband who has just been at the receiving end of a pretty catastrophic result in a PIP re assessment (it did eventually end well but not before huge stress and anxiety) she had every right to eye roll and say   ‘it’s not a week…its every week…and it’s the same old same old story.’

As a carer myself   I kind of agree and the conversation could have turned into a bit of a free for all where we shared our discontent over a drink about recognition of the work carers do, the paltry amount of carers allowance, the ‘system’, the BBC Panorama programme ‘Crisis in Care’ and many other issues, particularly around the emotional stress of caring that carers raise daily with us here at Carers Leeds.

But I chose not to….not because I don’t get where she is coming from, I have lived my own caring roles daily but because I’ve had 15 years of Carers Week…waving the flag…talking the talk….walking the walk …and I’ll tell you why this week has worked and I think continues to work.

Over the years of standing on street corners in the perishing cold (and yes it can be cold in June!)  hanging around in supermarkets with our information stands , in GP surgeries and hospital waiting rooms  promoting and raising awareness of Carers Week and how crucial recognizing and supporting carers is…..we have been approached by many people who think we are a) recruiting paid carers ie care workers b) by  people who mis read Carers for careers  ( any jobs going ) and c) many who think we are raising money and are so generous that they want to hear nothing about the charity but are happy to pop some cash in a collection tin ( which by the way we don’t have but  aren’t people lovely) 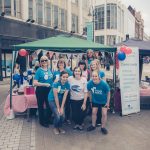 But….each and every time we have had conversations…where we have heard peoples stories, where we start to build a bit of a relationship by listening and supporting, having good conversations ( and those can happen anywhere!) ……we always….every time…. make contact with someone who is caring but has never thought of themselves as a carer.  We know people don’t identify as carers, they are getting on with looking after a family member or friend who they know couldn’t manage without their help but still just do it. I’m glad we live in a society where we care for people and care about other people…but I also know we must recognize, acknowledge and support those carers who are ‘just getting on with doing it’ so the caring relationship doesn’t break down.

Because what happens if they /don’t/wont/can’t continue to care for someone. Who will pick up the pieces.

So …let’s think about, one person in a supermarket who talked about finances for the person they were caring for and we helped that person bring more money into their household because we talked about Carers Allowance…..that’s Carers Week…..because we were visible and accessible in a community in a supermarket and we had a conversation. 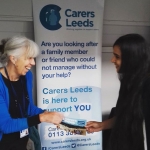 So…let’s think about one person who felt absolutely alone and scared of the future, family who lived hundreds of miles away …..we helped that person  link into a support group and our befriending scheme and the Carers Leeds dementia Hub…..for regular welfare calls….that’s  Carers Week. …..because we were available at the time that carer needed to speak in a GP surgery and we had a conversation.

So…let’s think about the young 19 year old carer who laughed at the very thought of being identified as a carer…but on talking realized she had no social life, wasn’t going to go to Uni even though she wanted to and she thought her  life caring was normal…and we hooked her up to our young adult carers and she is now at University…that’s Carers Week…..because we were in a hospital waiting room at the same time as the young adult carer was there with her mum and we had a conversation.

I could go on but I think you get my drift.

Carers Week…yes…it is every day…52 weeks of the year…but Carers Week does do good.

And as for our organisation…….Carers Leeds…..we will continue to get out and about  into communities…to help even one carer …that’s Carers Week.

And meantime back at base…the excellent work we do …goes on and always will.

That’s Carers Week. And so are the other 51 weeks of the year. Call us if you would welcome a chat and some help.”