During Carers Week, Kai (Carers Leeds – Concerned Other Carer Support Worker) would like to introduce you to one of the most talked about carers at the moment, Shuggie Bain. 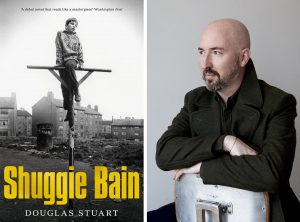 Shuggie Bain is a book by Douglas Stuart that won the Man Booker Prize last year, and follows Shuggie and his mother Agnes in 1980’s Glasgow. It looks at many themes such as childhood and poverty, but one of the main focuses is how Shuggie grows up with a mum who is dependent on alcohol.

Concerned Others – people who care for someone who uses drugs and/or alcohol- are often the forgotten carers. The way Concerned Others care is different to what people usually think about when we talk about carers. It’s less personal care, advocacy and daily tasks than a lot of carers, and more arguments, managing detox and recovery at home, and managing money for a substance they don’t want the person with an addiction to be taking in the first place.

The book explores the impact Shuggie’s mum’s drinking has on him. He takes on responsibilities no child should have, such as making sure she has a drink in the morning to prevent withdrawal, or managing money so he could eat,  and how he internalises her addiction as his fault, often saying ‘if only I was better then Mum would get better’. It also shows how being a child of a parent dependent on alcohol made him vulnerable to bullying and abuse. We work with a lot of adult children who grew up with a parent drinking, and often say they did not realise the true impact it had on them, because when they were young this was their normal.

The book also explores some of the lesser talked about experiences of being a concerned other, such as feeling  frustrated at needing help when the person experiencing addiction does not want help, and feeling annoyed at the amount of time and energy someone else’s choices takes from them. It also looks at how difficult recovery is, even when this is what people have worked towards it is scary to have hope after years of adjusting to their current routine

With a book about a Concerned Other winning the Man Booker Prize in 2020 as well as a finalist for many other book awards, the experiences of children who grow up with parents with addictions is being talked about more. Representation in the media is important for concerned others so they can see themselves and know they are not alone. There is a stigma for people who have parents with addictions and the book looks at how unfair this is. It is important for carers to see themselves in media and get support so they can see their emotions and reactions are valid; all the anxiety and anger and guilt (and everything else) is normal.

Available from all good book retailers: