Our bereaved carers team have joined forces with Leeds film making charity Lippy People to make a series of films. The films focus on bereaved carers, and show what it’s like to be a carer and how life changes following the death of the person they cared for. 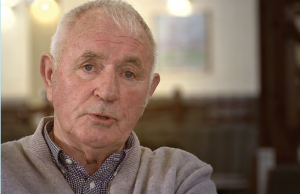 One of the films show carer Vince, who screened his film ‘My Maureen, My Rock’  to an invited audience of friends and family on 13th July at the Corpus Christi Catholic Club.

The film told the story of Maureen and Vince and their life in the pub trade. Just after they retired and moved to Spain, Maureen developed Progressive Supranuclear Palsy (PSP) and Vince became her primary carer. In the film Vince talks about what it was like to care for Maureen until her death.

As part of the evening Vince arranged a raffle and a staggering £585 was raised to continue the running of the Carers Leeds Support After Loss Group for bereaved carers. Raffle prizes were generously donated; a special thank you to Phil Bennett (Bennetts Butchers, Kirkgate Market), Terry O’Neill, Gary and Lynne Barass. Thank you to Mick Harrison, Secretary of the Corpus Christi Catholic Club for supporting Carers Leeds and Vince by hosting this great event.

To view Vince’s film and the others created by Lippy People in partnership with Carers Leeds visit the Lippy YouTube channel here.