With this year’s Alcohol Awareness Week it is impossible to ignore the elephant in the room: lockdown and COVID19. 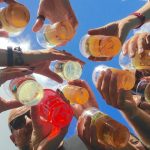 When the first lockdown happened in March (doesn’t that feel like it was years ago, not months?) there were a lot of jokes that “airport rules” apply, and drinking from 10 in the morning was normal now. Whilst people on social media were living their best #lockdownlife, for a lot of people they realised alcohol was a bigger problem than they thought.

From those who felt unable to cope with the big changes without alcohol, to those who found themselves unable to hide any longer what a big role alcohol already played in their life, lockdown has had a massive impact on peoples’ lives and their relationship with alcohol. In fact, Alcohol Change UK reports just over 1 in 5 people report drinking more heavily during lockdown. One big change we’ve noticed at Carers Leeds is the amount of people who have become Concerned Others basically overnight. People who were unaware of the loved one’s drinking outside of the home, or perhaps did not want to know about it were suddenly forced to confront this.

Lockdown has been difficult for our Concerned Others already known to us too, as face to face support ended and a lot of services unable to work from home, people who have fought to get a support network for the person drinking have lost this all at once. Rehabs units have had to limit the people they could accept, so those who had hoped for recovery felt this was no longer obtainable. A lot of coping mechanisms such as getting out of the house and seeing friends for a weekly catch up had to end, which was a huge loss. Most carers will agree that the small moments to themselves or at a peer support group is what keeps them going, so losing this has impacted on their mental wellbeing.

Although this year has been tough, throughout lockdown we have seen some real resilience and creativity from our Concerned Others too, from using this time to put boundaries in place to picking up new hobbies to cope. To quote one of my favourite podcasts (which has been my lockdown hobby) “Bad times are tough, but not tougher than me”.